You are here: Home / Gardening Tips & Inspiration / The Mystery of the Blue Begonia and How to Grow This Shade Flower (The Rarest Begonia)

The blue begonia, otherwise known as the peacock begonia, or begonia pavonina, is a rather unique type of plant. You can find it in Malaysia, more precisely in the rainforest region. People can also grow it at home as long as they know how to properly take care of it. The reason why this plant is so unique is that, as its name suggests, its leaves can turn iridescent blue depending on how the light hits them. Today, we’re going to talk more about the blue begonia, explore the mystery behind the color of its leaves, and mention the best way to grow it yourself. For sure one of our top strange plants.

Where Does the Blue Begonia Get Its Color?

The Malaysian rainforest is known for its low light. That is where the blue begonia leaves start shimmering iridescent blue. The reason why they do that is because of a quantum mechanics trick. The blue begonia contains a strange photosynthesis process. This process is what the plant uses in order to transform light into energy. The blue begonia leaves have an amazing capacity to capture energy from the red-green light of the Malaysian rainforest. No other type of plant seems to have this capacity to this extent.

It’s quite fascinating to see how the blue begonia has evolved more than other plants in order to make the most of the little light it gets in the rainforest. It had no other option than to try to adapt to the conditions of its natural environment, so the blue begonia ended up creating something that verges on the extraordinary.

Who Studied the Blue Begonia?

The people who first studied the blue begonia and its peculiarity were a group of scientists led by Heather Whitney from the University of Bristol. The team couldn’t study the original blue begonia plants found in Malaysia. That’s because they’re extremely delicate and would wither under different growing conditions. Not to mention the fact that they grow very slow as well, so they had to come up with a different solution. This was to use a crossbreed of two begonia plant species that they grew in the lab. The breed was much stronger and easier to work with, but it managed to preserve the blue leaves that are characteristic of the blue begonia.

That is not to say that other plants don’t have these structures. They do, but theirs are placed at random. In the case of the blue begonia, they have an amazingly regular structure, which is obviously planned. The fact that they’re placed the way they’re placed is what makes the leaves look iridescent blue. That’s because the chloroplast capsules reflect away the wavelengths of light which are also blue. 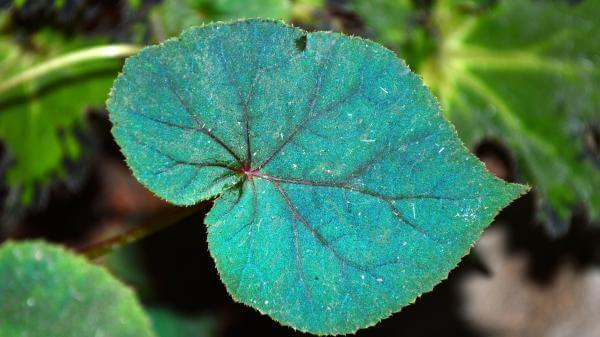 What Else Does the Blue Begonia Do?

Another fascinating thing to mention about the blue begonia is the fact that it absorbs both blue and red-green light from the rainforest. In fact, it absorbs much more red-green light than blue. The structures of the thylakoids resemble a crystal which means they filter light in a unique way. The light that reaches the chloroplasts slows down while passing through these structures, a phenomenon which is called slow light. This phenomenon is part of the reason why the blue begonia is 10 percent more effective at photosynthesis than other plants.

The blue begonia plant contains two kinds of chloroplasts, the normal one, and the blue one. Researchers believe that the plant uses the blue ones whenever it needs a backup generator. For example, if there’s enough light outside, the blue begonia will only use its natural chloroplasts. If the light becomes too low, it can use the “spare” blue ones.

As such, the blue begonia is an amazing example of the potential plants have of adapting themselves to their natural growing conditions. It shows that plants are capable of manipulating light to serve their purposes. This could mean that there are more plants out there that can do the same thing the blue begonia does. What we must remember is that the only reason why we can observe this phenomenon in the blue begonia is because of its peculiar color, and nothing more. If other plants are doing it, but don’t have any specific and/or unusual color, noticing it can be very difficult.

What Do You Need to Know in Order to Grow the Blue Begonia?

The first thing you need to know about the blue leaf begonia is the fact that it can’t really survive in a warm climate. This is especially true when the nights are warm as well. The best temperature for growing it is somewhere between 55 and 75 degrees Fahrenheit. In terms of humidity, 50 percent would be perfect, or even higher than that, but never lower. Now, one of its most notable characteristics, the blue leaves, shine blue when the plant is surrounded by deep shade. Which is why we recommend you to plant it in a place where it will get exactly that. It can also develop in bright sun, but it won’t thrive as much.

At the same time, you have to make sure the plant is surrounded by natural light. If you keep it inside under artificial light, the blue of its leaves won’t be as noticeable as under natural light. Another reason why we advise you to plant it outside instead of inside is that the cold temperature of the night also helps the blue shine brighter.

For a growing medium, if you have a potting mix designed for terrarium begonias, this should work perfectly fine for the blue begonia as well. Just make sure that the medium will drain well. These plants don’t enjoy soggy soil, but a rather moist one. The soil should also be slightly alkaline, which is why we suggest adding a little bit of lime to it, especially if you know it lacks minerals. Just to give you an example of a soil mix that works perfectly for blue begonias, consider using 2 parts long-fiber sphagnum moss or coir fiber to 3 parts perlite.

The technique you’re going to use when planting your blue begonias depends on whether you want to plant them from seeds, bulbs, or a potted plant. If you’re going for seeds or bulbs, what you have to do is dig a hole that is just a couple of inches deep and can host your begonia seeds/bulbs. If you have a potted plant that you want to transplant outdoors, make sure to create a hole that is capable of covering the root ball of your plant.

When placing the begonia plants, or the seeds and bulbs, into the ground make sure to only place one in each hole. Blue begonias have no problem growing close to each other or to other plants, but placing more of them in one hole would be too much. After you’ve placed them in the hole, it’s time to take some soil and cover them. Then, you shouldn’t forget to water them as well, since this will help them get settled. Keep the soil moist, but avoid drenching it, because you’ll get the opposite of your desired result.

Blue begonias need constant watering, especially at the beginning. This means that every couple of days, you’re going to have to take care of them. If this seems like too complicated of a task, you can always install a sprinkler system and schedule it to water your begonias at certain intervals. But be careful with your sprinkler spacing so as not to inundate the culture.

Whenever you plant blue begonias, you should also consider the fact that you have to keep weeds away from them. While planting them in pots generally eliminates this issue, planting them outside means you’ll have to pay attention to weeds disrupting their growth. We recommend you to check this quite often. After all, you don’t want weeds to invade your plants before you get the chance to act. 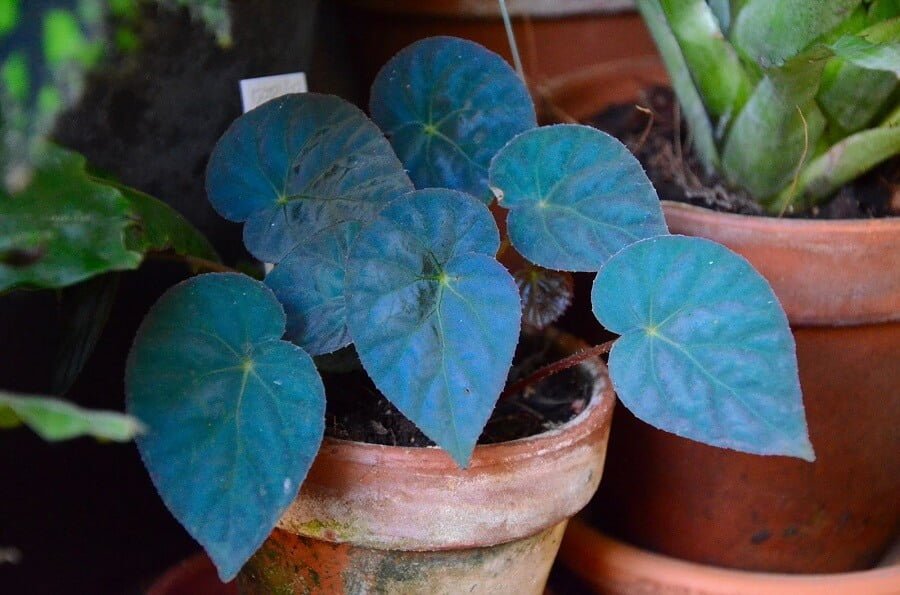 Fertilizing is also important for blue begonias. You should use a 20-20-20 liquid fertilizer every month, or rely on peat moss and compost. You can also mulch the area where you’ve planted the begonias. This will help you prevent weeds and keep the soil moist.

We hope you had as much fun reading about the mysteries of the blue begonia as we did writing about them. This unique flower shows us that the world of plants is much more complex than we know it to be. This world is definitely worth exploring even further. If you want to add a unique plant variety to your collection, try growing blue begonias for a touch of blue magic in your garden.