You are here: Home / Must Reads / Tips on How to Have the Most Epic Snowball Fight This Winter

Get ready ladies and gentlemen, because snow is starting to fall. That means it’s time for snowball fights! I know that having a snowball fight isn’t everyone’s cup of tea. You usually end up wet, cold, and with a few bruises. However, some people love having the thrill of trying to hurry and make more ammo before someone else gets you. There are so many fun ways to have a snowball fight, it doesn’t need to be an all-out war (unless you want it to be). Here are just a couple of tips on how to have the most epic snowball fight this Winter.

How to Have an Epic Snowball Fight

It’s fun to have everyone just go crazy and throw snowballs at whoever comes their way, but it’s also fun to be organized for your snowball fight. Make teams and wear specific colors. This way you know who you are trying to hit and who is trying to help you. Have team captains to choose the teams or number everyone off and split them up into groups.

Sometimes having restricting rules can kill the fun. However, in this case, rules might make the game a lot more fun instead of just a crazy battle. This way less people will end up getting hurt too. Maybe you aren’t allowed to throw snowballs at someone’s head or face, just their body. It’s also fun to have a base or a safe spot where no one is allowed to throw snowballs at you, the tough part is getting there. Have rules on how you decide who the winner of the snowball fight is. It could be like dodgeball where if you get hit, you’re out. Or it could be like capture the flag and someone needs to get the other team’s flag in order to win. 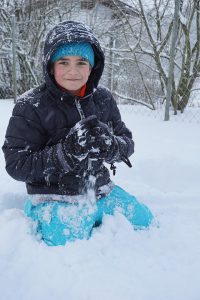 Have a Snowball Thrower

Sometimes your arm can get tired from throwing snowballs for a long time. A snowball thrower is great to have for situations like these. When your arm gets tired, bust out your snowball thrower and go to town. It’ll save your arm for awhile, and it launches the snowballs really far. You don’t always need to have one, but it’s good to have just in case you need it. It can be your secret weapon in your snowball fight.

Having a snowball fight is a fun way to play in the snow. You can have it be free for all, or get organized and start developing some strategies. Some people might prefer to just build a snowman, but a snowball fight can be a blast. Just make sure that everyone is playing safe and isn’t specifically trying to hurt someone. Have a few rules for safety and everyone will be having a blast!