You are here: Home / Design / Landscaping Inspiration / Pruning Shears 101: How to Choose the Best and 5 Tips on Using Them

If you have shrubs, roses, or trees in your garden, then you should already be familiar with the importance of pruning them. They will look much better, develop new growths, and generally maintain their health and appearance for a longer period of time. Pruning can’t be done without the proper tools, out of which pruning shears are definitely the most important. Today, we’re going to tell you all about how to choose your pruning shears according to your needs, and provide you with a couple of tips on using this tool.

How to Choose Your Pruning Shears

The first thing you need to know about pruning shears is that there’s more than one type that you can choose from. In fact, there are 4 main types of pruning shears, each one suitable for a different kind of pruning job. Let’s see what each of them has to offer!

The most noteworthy feature of this type of pruning shears is its ratcheting mechanism that makes it much easier for you to cut things with it, due to its similarity to a car jack. As such, this type of shears is perfect for people who have weaker hands and have difficulties pruning as a result of it. This tool comes with anvil style blades, which means the sharp upper blade presses on the anvil (which is unsharpened). It can cut thicker branches as well, and it comes with an easy-open lock which makes it that much easier for you to use. 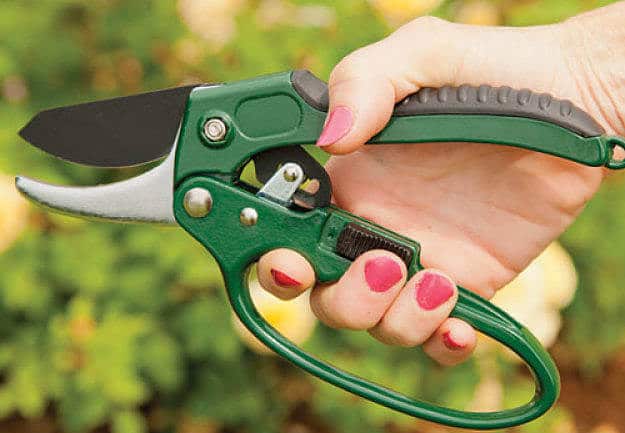 As the name so overtly states, this type of pruning shears has the blades shaped exactly like a parrot’s beak. In fact, the blades also work similarly to how a parrot’s beak works. When they trap something in between, they crush it and cut it instantly. Still, this isn’t a pruning shears type suitable for cutting trees or shrubs. We recommend you to purchase one only if you need it to cut different types of flowers in your garden.

The last type of pruning shears that we would like to talk about is the anvil type one. This one has a sharp blade that goes over an unsharpened one and cuts branches (particularly smaller ones) by applying a lot of pressure on them. If you own small trees that you have to prune, this is the perfect tool for you. It helps you get rid of dead branches quite fast. One thing you must remember is not to allow the blade to turn dull. This will make the shears crush the stems instead of cutting them.

The size of the pruning shears is also important when making a decision. That’s because it has to fit in your hand and allow you to prune comfortably. If the shears end up being too big, you won’t be able to properly hold it in your hand. At the same time, if it’s too small, it might pinch the skin at the base of your thumb. We advise you never to buy pruning shears without testing it out first.

The shears’ design can also be something that determines whether or not you feel comfortable using it. Ideally, the design should be ergonomic, so that your hand can have a relaxed and comfortable position. If when you’re using pruning shears, your hand or wrist is bent in strange and uncomfortable ways, then you know you have to keep looking until you find the right tool.

Whenever you choose a type of pruning shears, you have to consider the kind of plants you have in your garden. For instance, if you have trees that have thicker branches, you’re going to want to purchase a pair of shears with a larger head size. If the shears can’t properly grip the branch, this is going to leave torn stubs, which is the last thing you want.

Of course, quality is also important when it comes to the perfect pruning shears. The springs should be sturdy, the handle coverings should be durable, and the bumpers should be able to absorb shock. We recommend blades that are made of high-carbon steel because they’re some of the strongest and most durable ones.

Especially if you’re not willing to invest a lot of money in pruning shears, you’re going to want to look for a pair that is appropriate for more than one task. While there are also tools that are targeted to a specific job, such as rose pruners, we advise you to consider a more versatile one, especially if you have different types of plants and shrubs in your garden.

As with any other tool, you will have to provide your pruning shears with some amount of maintenance. Which is why looking for one with easy access to the parts that need cleaning and sharpening is recommended.

Now that you know how to choose the perfect pair of pruning shears for your needs, it’s time to also take a look at how to use them like a pro.

1. Decide What You Have to Prune

The first step that you have to consider before you even start pruning your garden is to survey it and decide what are the plants that need pruning. This has to be done at the end of the growing season when most of your plants are already fading away. Take a walk through your garden and look at bushes, trees, and any other type of plant that you think might require pruning. This will allow you to approximate the amount of time you’re going to need in order to prune the entire garden.

Never start pruning without first sharpening your pruning shears – this is a rule that you should always remember. It will be much easier for you to prune with a freshly sharpened pair of blades. We recommend using a tooth file that you hold at an angle and run against the blade. The movement has to be from your body outwards.

While pruning is not necessarily a dangerous activity, you should be careful when doing it and protect yourself as much as possible. Two main ways in which you can do that is by wearing gardening gloves and safety glasses. This is especially true when you’re pruning pricking trees or bushes. You don’t want to run the risk of something accidentally hurting your eyes. 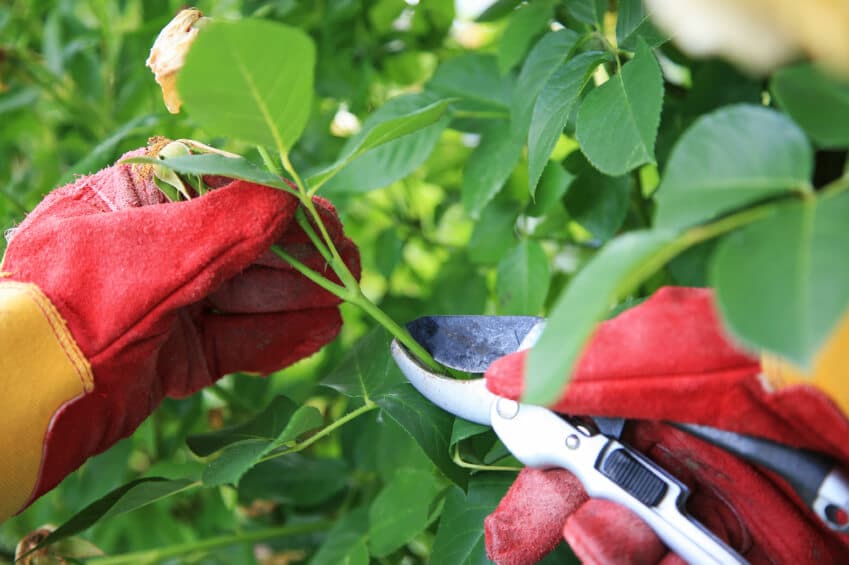 Since we’ve promised that we’re going to teach you how to prune like a pro, it’s time to take a look at a couple of tips and tricks that you should remember whenever you prune your garden. First of all, you’re going to want to firmly hold the branch that you want to cut in your hand, more precisely in between two fingers. The branch should be kept in a straight position, so don’t turn or twist it in any way.

Then, hold the pruning shears in the other hand and use it to snip the branch. Don’t forget to check whether the cut was clean or not. It’s important for it to be clean because otherwise, the health of your plant might be endangered. This means that you’re also not allowed to pull on any of the branches. Don’t worry if you’ll have to cut multiple times until you prune a branch, this is absolutely normal.

The process of cleaning pruning shears is not at all complicated. Basically, everything you have to do is rinse them with some water and then make sure they dry well before you store them away. In terms of storage, we recommend keeping them in a place where they’ll be protected from weather elements and won’t rust.