You are here: Home / everythingbackyard.net / How to Keep Deer out of Your Garden to Let Your Plants Live 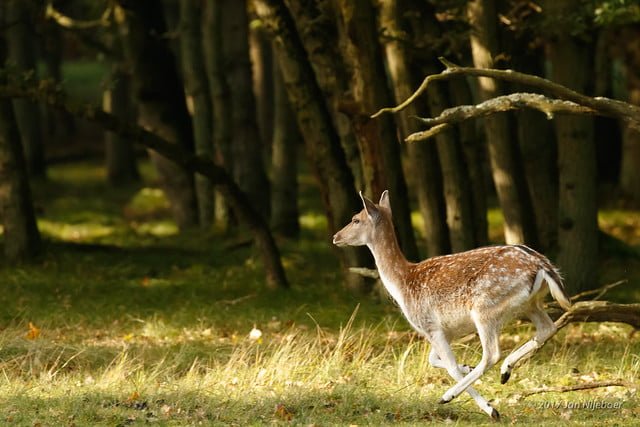 If you have some land of your own or a backyard, it’s just natural to know how to keep deer out of your garden. Sure, they look adorable and innocent enough in cartoons, pictures, and zoos. Let them spend some time in your garden or orchard, though, and they’ll probably destroy everything in sight.

Why do deer have such a negative reputation when it comes to gardens, yards, and the like? The obvious answer is that they’ll munch on trees, flowers, plants, bushes, and anything else that makes your garden a patch of heaven. There’s a reason why their zoo enclosures are usually so barren.

If you’re not a fan of having a messy, ragged view, there’s a lot to know about how to keep deer out of your garden. You’ll have to move fast and think creatively, as these animals are voracious, adaptive, and intelligent to boot.

We’ll give you several repelling methods below:

Plants That Are Most Loved by Deer 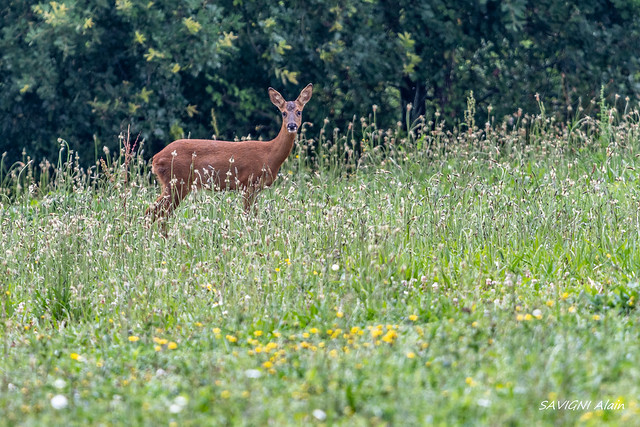 Deer tend to eat several kinds of plants, including fruits, flowers, and even shrubs. They aren’t too picky, especially if there isn’t much choice. For instance, you’ll have to work hard to protect your evergreens during the winter when the pickings are slim.

Still, there are some plants that deer absolutely love to eat. If you’re not interested in setting out a buffet for those hungry deer, you should avoid growing these plants at all costs: 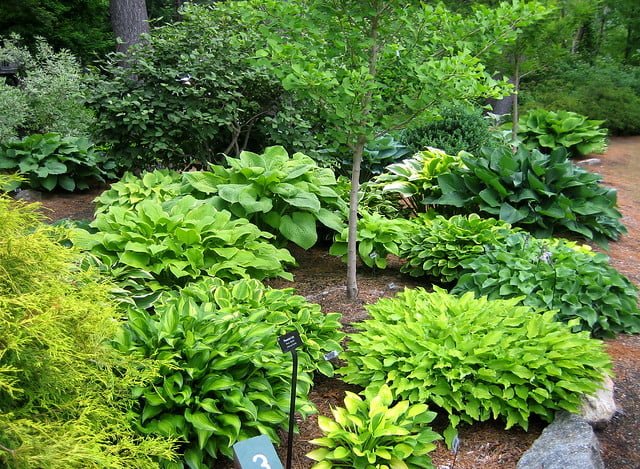 This is a plant that grows in the shade and blooms prettily when the time is right. It’s quite a favorite among gardeners, as it lasts a full three seasons. Still, you want to avoid hostas when there are deer nearby, as they adore these plants for a quick snack. 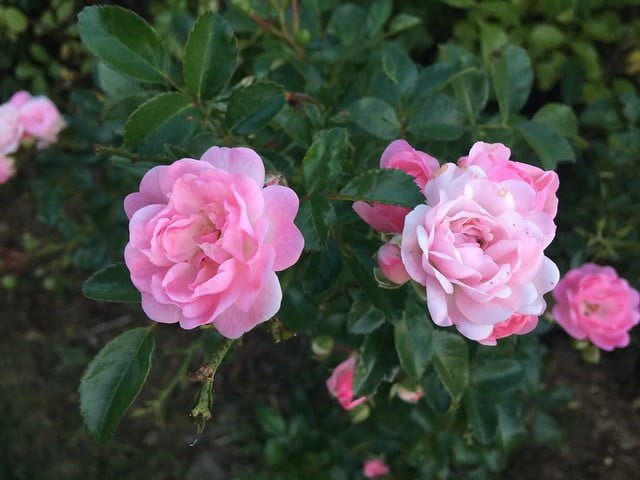 Several rose varieties, especially Knockout Roses, are coveted by deer. They do have thorns, which you might think will put the deer off. However, the animals are likely to simply munch off the blooms and leave the thorny shrub behind. 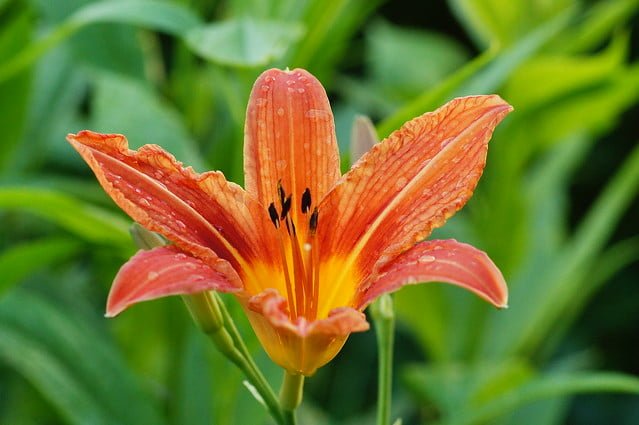 When they’re in bloom, daylilies are a delight for anyone who owns a garden. If there are deer nearby, though, you might not get to witness this display for more than a couple of days. Once the deer get wind of this plant, they’ll come running and snap up all the bulbs. In fact, they love any plant with bulbs. 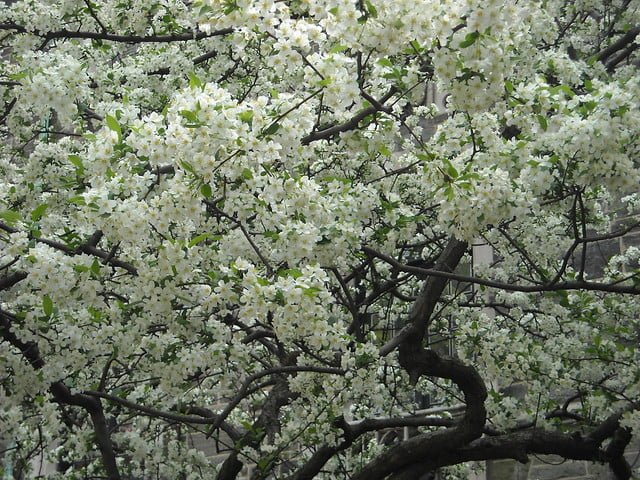 Dreaming of an orchard? You’d better have something robust to keep the fruit-loving deer out! They’ll be breaking down fences and perhaps even disregard any other deterrents to get at your harvest or energy-packed fruit. 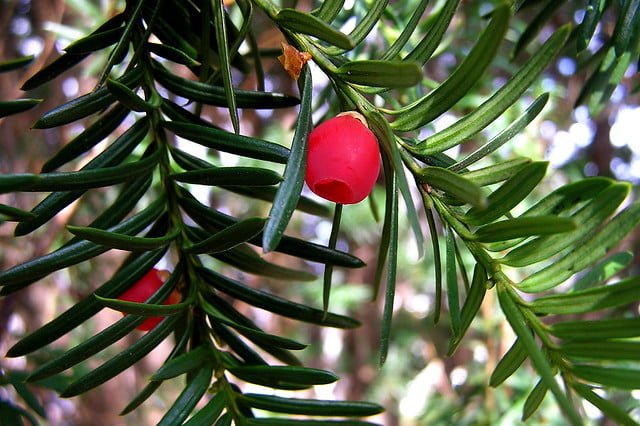 Deer might not destroy yews completely, but they’ll pull them out of shape. The Japanese Plum Yew might be an exception. 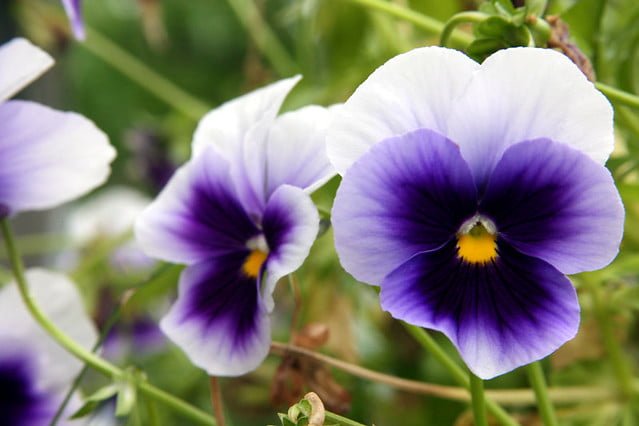 These give some color to your garden even when it’s late in the season, but having flowers at this time would mean an added risk from deer. They aren’t too spoiled for choice at this time of the year, and pansies would only tempt them. 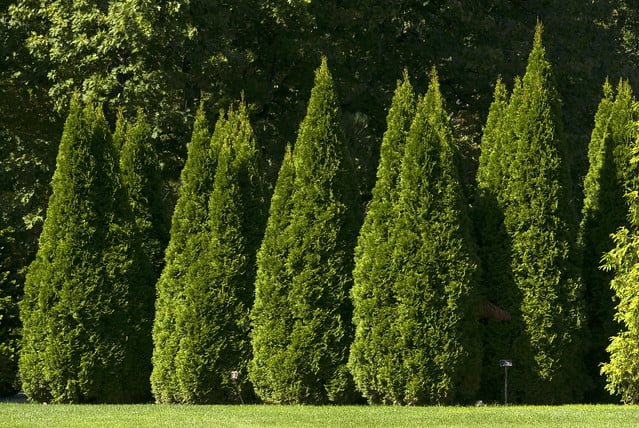 The main attraction about this plant is its narrow leaves. You should also be wary about other plants or trees with a similar shape, such as fir trees.

There are several other plants that might attract deer, but the list is too long for us to cover them all here. Some people might also be growing the above plants in proximity to deer-populated areas and not experiencing any issues. This might be for several reasons, so we can say that it’s about some trial-and-error before you hit upon the safest selections.

How to Find out If Deer Has Attacked Your Garden 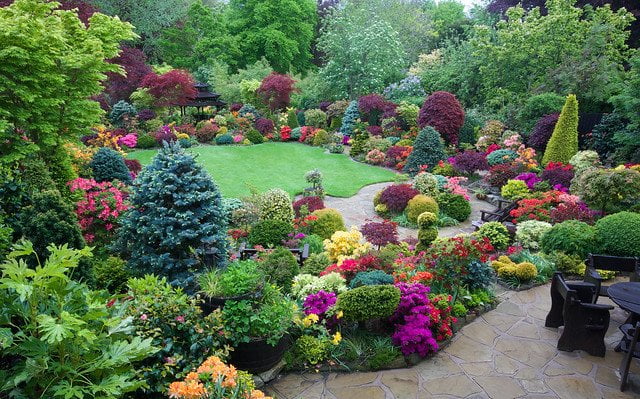 Deer might be beautiful to look at and make for cute cartoons, but they’ll attack your garden if they’re in the vicinity. Just one deer alone can consume about 10 pounds a day. Imagine that amount of plants, leaves, and bulbs, in addition to the vegetables you might have in your garden! You can determine whether there’s a deer menace in your garden through certain telltale signals.

These signals include any half-eaten vegetables or fruit lying around, scraped trees, and leaves with ripped edges. Any buds with bites taken out of them, mysteriously misshapen trees, or squished plants are other telltale signs.

The deer themselves also leave behind their physical markers, such as droppings or hoofprints. The latter are shaped somewhat like hearts. Again, an adorable trait, but it’s also an unlucky sign that should have you searching on how to keep deer out of your garden.

So, How to Keep Deer out of Your Garden?

Fortunately, there are some easy tips and tricks that should keep the deer away for some time. Be warned, though; they might come back if there’s no other source of food or if they adapt to your repellents! 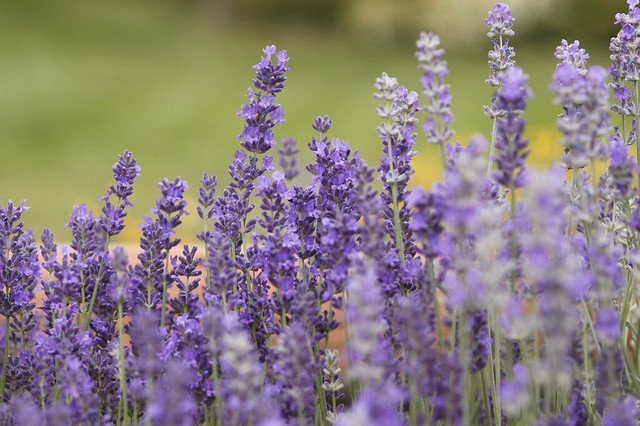 If we humans don’t like the smell of a certain food, we don’t want to eat it. Most animals are the same, so this could be one factor that tells you how to keep deer out of your garden. Any plant that has highly aromatic foliage will put deer off, and lavender is just one of them.

Several flowing herbs like lavender, oregano, sage, catmint, and thyme are also excellent choices. They’ll fill your garden with rich fragrances and keep those pesky deer away as well. The aroma will confuse their olfactory systems and make them unlikely to feed. Other great options are bee balm, mountain mint, dead nettle, and dill. 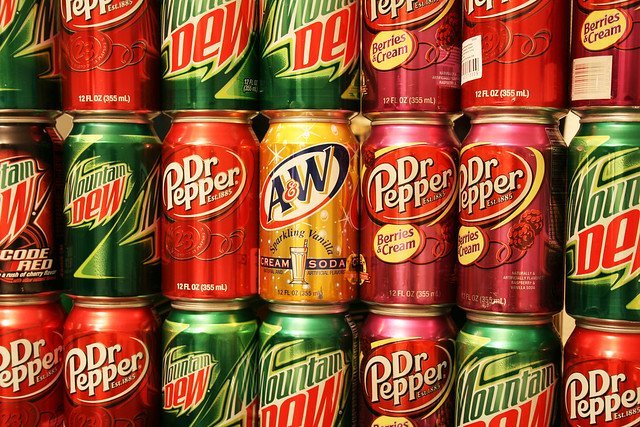 If you ask around about how to keep deer out of your garden, one of the most common answers would probably be to hang up something noisy. Unexpected sounds or sights are an offense for the famously skittish deer species, so you can use this to your advantage.

Aluminum cans will certainly make a racket if you string them up in various corners. Other options include using CDs. They won’t make an unpleasant sound, but their motion isn’t familiar to deer. That will spook them enough to leave your property alone.

A white flag, pie pans, or even turning on some talk radio could also be great ideas. You should switch up these techniques once the deer start getting comfortable with the old one.

Harvest attractive fruits and veggies as soon as possible

Vegetables, fruit trees, and other produce in your garden will attract deer like flies to jam. Therefore, you should keep a close eye on your precious harvest and get it inside as soon as possible.

Scare them away with motion-activated water sprinklers 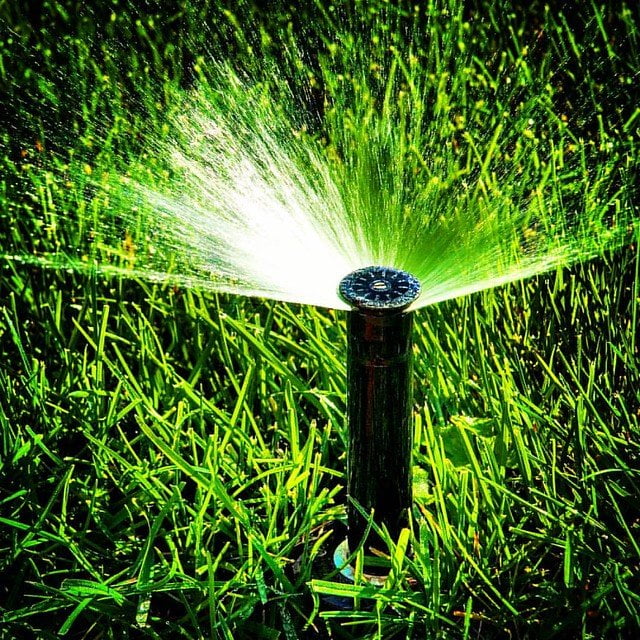 You might want a humane yet somewhat permanent idea for how to keep deer out of your garden. One of these is to set up some motion-activated sprinklers, especially near your most precious trees and garden beds. Infrared technology is excellent for detecting movement at any time.

The water blast here would be harmless, while you might also find models that make a sound at the same time. This will hopefully scare off deer as well as other pests.

Choose a good deer repellent or make one at home 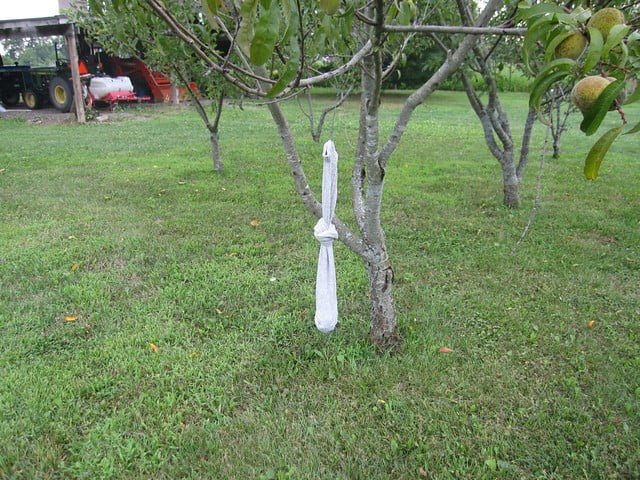 There are several deer repellants on the market that can obstruct the deer’s senses of smelling and tasting. Some might emit a smell that deer detect as that of a rotting dead animal. If the deer still happen to taste something coated with the repellent, it would taste like garlic to them. This taste is unpleasant enough to these animals to make it back off.

These repellants might last for quite a long time (around three months), but it might also smell unpleasant to you. If you want to know how to keep deer out of your garden in a non-chemical way, there are repellents you can make at home. It’s as easy as blending eggs, hot sauce, and some garlic powder with water. You can spray your garden with this solution just after the morning dew dries up.

You might have to reapply the natural homemade repellant after a week, or every time after it rains. However, you can rest assured of it not harming your vegetation.

Make use of wind chimes 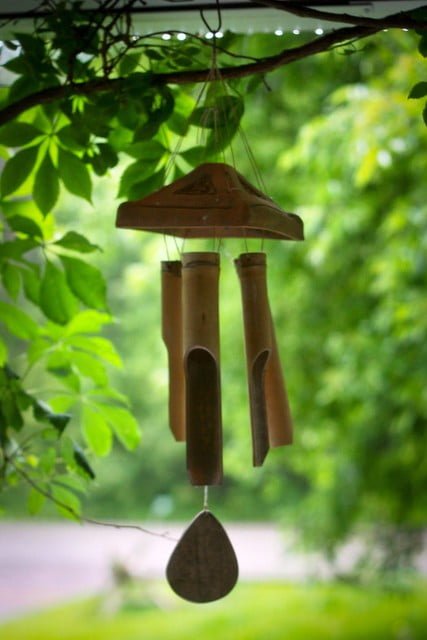 This is another sound effect that will make deer think that your property isn’t safe. The chimes can produce a sound with every gust of wind, so they’ll keep the deer on their feet. You can hang up a variety of these chimes, both metal and wooden. It might not be the final word in how to keep deer out of your garden, but it’ll work well if you’re just starting off with keeping them away. 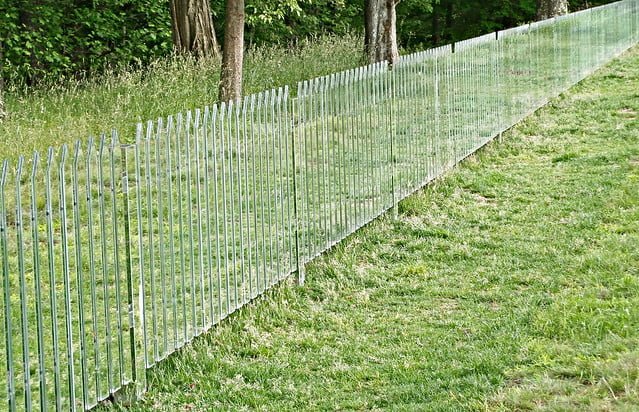 When pondering ways on how to keep deer out of your garden, there’s nothing wrong with a good old fence. However, this is an expensive option which might also hinder your own view. Why go for a huge, bulky fence when a few spools of fishing wire might do wonders?

Before using the fishing wire, you can measure the garden’s perimeters and then string a line a few inches above the ground. You should repeat this procedure, keeping each row about a foot away from the one below. The deer won’t be able to see what’s hindering them, so they won’t risk jumping either. 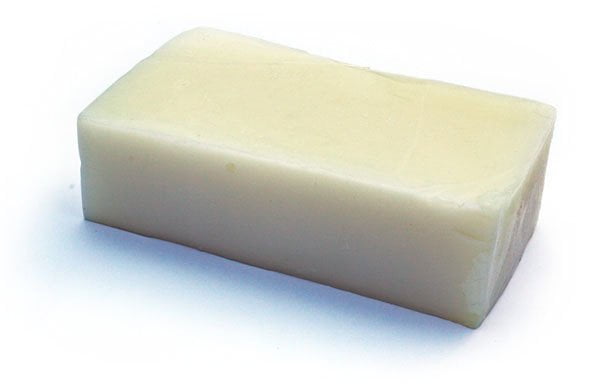 Scatter some soap shavings around your plants to protect them from much-happy deer. This is an effective method for keeping your garden safe as well as a long-lasting one. The soap will only disintegrate during rain and lasts for a month otherwise. It will also dehydrate any bugs in your garden soil.

Don’t let the deer hide in your landscape

Your landscape should be as open as possible, without any convenient hiding places for deer. Therefore, you should trim the dense plants and space the trees apart as much as possible.

Add sunken beds and chopped woods to your garden

If you’re confused about how to keep deer out of your garden, it’s wise to vary up the terrain to make it difficult for them. Deer are lazy about climbing slopes or navigating obstacles. You can go for sunken beds, stacked wood, and terraces that will make deer afraid to venture into your property.

Getting Closer to Having a Deer-Free Garden

Deer might be a smart species, but we humans are smarter. Once you understand what they detest and fear, you’ll be easily able to figure how to keep deer out of your garden. You might have to switch up methods as they adapt to them, but there’s no shortage of ideas either!

How are you going to keep deer out of your garden? Tell us about it in the comments!