If you’re the proud owner of a Japanese maple, then you know that their branch structure is quite intricate. Of course, this is part of what makes them so appealing, flowing harmoniously without needing too much assistance. Still, if you want to make sure that your Japanese maple gets the best care and doesn’t become too unbalanced, you have to learn how to prune it. This is precisely what we’re going to help you with today, by taking you through the 11 main steps of pruning Japanese maple trees.

Step 1: Know When You Have to Prune a Japanese Maple

Japanese maples can’t be pruned whenever you want to. First of all, you shouldn’t even consider pruning them before they’ve reached maturity. Usually, people prune these types of trees because they want to provide them with a better look, not because there’s something wrong with them. So, when it comes to eliminating branches that are diseased, dying, or dead, this is something that you can do no matter how old the maple is. If the reason why you’re pruning your maple is that you’ve noticed branches that look unappealing or awkward, you’re going to have to wait until the maple grows to its fullest. This can happen in about three years.

The season when you take care of pruning Japanese maple trees is also important. You should do this either in summer or in winter. Autumn also works, but spring is never an option since that’s the moment when the maple develops sap. Here’s how you can decide if you want to prune your maple in summer or in winter. If you choose to do it in summer, this will allow you to picture how your tree will look after you remove the branches that you want to go. Moreover, pruning in this season also ensures fewer growths. This is good news if you want to keep the tree under control. If you decide to prune in winter, the bareness of the branches will allow you to have a clearer picture of which branches are interfering with the maple’s structure.

Step 2: Figure Out the Proper Shape for Your Tree

The shape is really important for a Japanese maple since its glory rests in its harmonious branches. Depending on the type of Japanese maple you have in your garden, you’re going to have to decide on the shape your tree will take after you prune it. The two main types are lace leaf and upright.

Step 3: Get Rid of Dead Branches

Now that you’re all set with when and how you should start pruning Japanese maple, it’s time to get into the actual things you have to do to style your tree. The first thing that you should take care of is dead branches or those that are about to die and/or look diseased. The Japanese maple can grow something called deadwood. These are dead stems that usually appear on the inside bottom of the maple. They do that because that area gets a lot of shade, and the wood tends to rot. If you don’t get rid of that wood, the rot will spread to the rest of the tree as well.

Your next concern should be branches that intertwine or cross since they disturb the natural silhouette of the Japanese maple. Even if you think that they look good as they are, you should still cut them off. The reason why is because growing so close together, they will most likely disturb each other’s growth. The choices you have are to either cut off both of the two branches that intertwine or just cut off one of them. The way to do it is by taking a saw and cutting at the base of the branch, close to the trunk. If you start cutting just from where they overlap, you won’t get the desired results. 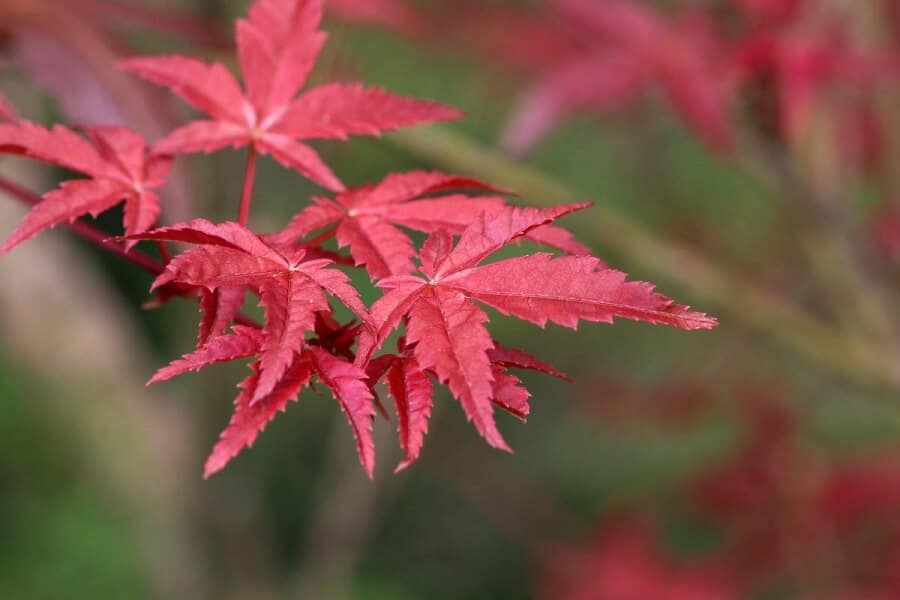 The most important part of any Japanese maple is its strong branches. Which is why you have to make sure that no weak branches will get in the way of the strong ones developing properly. If weak branches grow too close to strong ones, the foliage will start to look clumpy. What you want to do is make it look even and properly thinned out. The trick to differentiate between weak and strong branches (apart from the way they look), is to establish which one is more important for the overall look of the tree, and then cut the other one off.

It’s extremely easy to realize which branches are growing properly and which are not. All you have to do is consider the type of maple you have. If you have an upright one, any branches growing downwards have to be eliminated. If you have a lace leaf maple, you should cut off any lower branches that extend either upwards or straight.

When pruning Japanese maple, you have to remember that this tree variety comes with opposite branches. These are branches that grow out of other larger ones two at a time. They take the shape of a “Y” that has an additional branch coming out of its center. What you have to do when you prune your maple is to cut off that middle branch. This will make all branches look like a “Y”. Make sure to eliminate as much as you can out of that branch, even though you won’t be able to completely get rid of it.

If you have an upright Japanese maple, you might notice that there are some branches that grow quite low on its sides. This can be a problem for some people, especially those who want to grow other types of plants under the maple and who don’t want their growth to be affected by these lower branches. Even if this is not the case, such branches can even make it difficult for people to walk under the tree. You can choose to eliminate them if you feel like they’re only bringing you trouble.

In the case of the lace leaf variety, it’s a common occurrence to see branches hanging extremely low. Even so, if they’re dragging on the ground, this is a sign that they’re too low. Thus, you should cut them off (although you’re not required to).

One of the greatest things about pruning Japanese maple is that you can also control the direction in which your tree is going to grow. All you have to do is pay attention to the moment when new buds are developing. Then, pluck the ones that you think will cause branches to grow in inconvenient places. This will determine the tree to redirect the way in which it develops new branches.

Step 10: Make Sure the Tree Is Balanced

Whenever you’re pruning Japanese maple trees, it’s important to keep their appearance as balanced as possible. This means that you should beware of extremely obvious diameter differences. They will make the maple look out of proportion or unbalanced. Another way to make sure you prune in a balanced way is to prune lightly. This will prevent branches from growing more on one side than on the other. 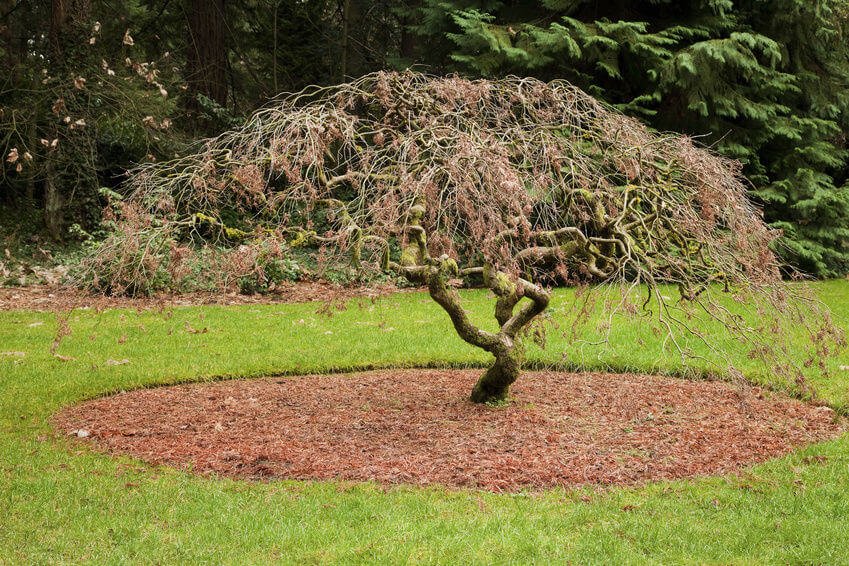 There are two limits to pruning Japanese maple trees that you should be aware of. The first one is that any branches that have a diameter larger than half of the size of the trunk should never be cut off. The second one is that you should never prune as much as to remove more than 1/5 of the crown of the maple. This might cause it to grow excessively and uncontrollably.

Japanese maples are some of the most beautiful and imposing types of trees that you could plant in your garden or backyard. Once you manage to plant one, you’ll be able to enjoy it for a long period of time, without too much maintenance. The only thing a Japanese maple requires on a regular basis is pruning. We hope we’ve taught you all about in today’s guide. As long as you go through all the steps we’ve outlined above, your Japanese maple will develop beautifully, enchanting anyone who lays eyes on it.

If you’re looking for some really sturdy and reliable pruning shears, allow us to recommend a couple of options, such as the TABOR TOOLS K-7 Straight Pruning Scissors, the Shineliu Pruning Shears SK5, or the Gonicc 8″ Professional Sharp Bypass Pruning Shears – all of which you can find on Amazon.