As of this writing, there are 1,771 customer comments and 25 answered questions for the Mallory Snow Brush. I have read the customer feedback and then condensed the results into this review. I hope that this review helps you when shopping for the best ice scraper for your vehicle.

The Mallory Snow Brush is 26 inches long for ample reach and compact storage. It features four rows of sturdy plush bristles for removal of heavy snow. The 4″ wide scraper blade with tough ice chippers allows you to break through and clear thick ice. This ice scraper has a contoured soft foam grip that provides comfort and control.

Unfortunately, there were quite a few reports of customers receiving defective snow brushes. Some were missing bristles. Here is just one of the many comments about receiving a defective snow brush, “Decent snow brush now that I’ve actually received a proper one. I’ve had better ones, but for the price I paid for this, I’m more than satisfied. Especially now that Amazon replaced my first broken one. Double check yours before you use it, otherwise, you could end up damaging your car or breaking the snow brush without knowing it was defective/damaged in the first place. Especially with how the company tried to hide the damage from the first one I received. Hopefully, it lasts as long as my previous one. Had that one for years finally decided to retire it.”

Bristles May Fall Off

Some customers reported that the bristles started to fall off shortly after using it. One person wrote, “Terrible. Don’t buy this. The bristles of the brush all fell out the first time I used it. It was even a light snow so there’s no reason this should happen. Scraper portion seems fine.”

The padding where you hold the brush is loose according to customers. This is a section that you would want very tight since it will get a lot of wear. Being loose to start with most likely means it will continue to loosen. One person said, “The padding around the handle seems a bit loose. I bought this one along with the slightly less expensive Amazon Basics one and would easily recommend the Amazon Basics one over this one… though they are both nearly identical. The bristles on this one seem less sturdy and the cut of the plastic on the end isn’t as good as the Amazon Basics one. The scraper part and overall construction of the plastic piece seems very durable, but the foam padding is what concerns me the most.”

It normally doesn’t take a person long to find out that a snow brush will work for the vehicle intended. At 26 inches long The Mallory Snow Brush should be able to reach the center of most vehicle’s windows of course depending on your height and arm reach. Most people felt that the length was plenty long enough and that it was comfortable to use.

One customer commented, “Bought a pair of these, one for my Titan XD Pro-4X pickup (which needs a VERY long reach to clear the center of the windshield) and one for my wife’s Toyota Prius (which most assuredly does not 🙂 ). The scraper and brush work fine, but the feature I most appreciate is the grip, which is very comfortable to use because of the cushioning and the ribbed design, which makes it easy to grip, even while wearing gloves.”

Most customers felt that The Mallory Snow Brush was compact enough to leave in their vehicle at all times. Here is one of those comments, “Gets the job done, I have no complaints! Compact enough to leave in the car at all times, and effective against snow, frost, and ice. Keep your fancy extending ice scrapers with detachable components — I’ll take this effective, simple solution over more complicated ice scrapers any day.”

Scraper at Opposite End of Brush

Most of the people who commented about the design of the brush, liked that the brush was at the opposite end of the scraper. One person said, “I bought this to replace a similar one that I gave away last winter before realizing the one I kept was not as good. I like that the brush is at the top and the scraper at the bottom, it is also a bit longer than my previous one so I can reach more of my windshield. Having the scraper at the very top and the brush a few inches down makes it very cumbersome to clean the snow from windows and other small areas and the scraper at top of the brush could scratch the vehicle. No more giving away, now I will be ready when the snow comes. I was sent a red instead of the blue shown here.”

Of course, a scraper is going to need to have some sharp edges to be able to effectively scrape. However, there were quite a few complaints of this ice scraper being too sharp. Here is one of those comments, “This scraper is pretty good but it does have some flaws in my opinion. First off the blade/scraper seems to be very “slick” on my windows. I’m not sure how to describe it but as I’m scraping I often slip and nick the rubber seal at the edge of the window. This has never happened in my life until I got this scraper and I have done it probably 10 times now this winter. It just slides faster then all the other scrapers I have ever used. So now when I’m near the edge of my window I am very careful because the scraper is sharp and has nicked the rubber edge on my windows in several places. It’s not a huge deal but I would prefer not to damage anything when I’m scraping. The other thing about the scraper is that the brush is on the opposite side of the scraper. This allows for a nice handle on the scraper side but the brush is kind of heavy after scraping for a while. Because it’s on the opposite side of the scraper it can cause minor fatigue in my scraping hand. I usually hold the scraper with 2 hands because of this.” 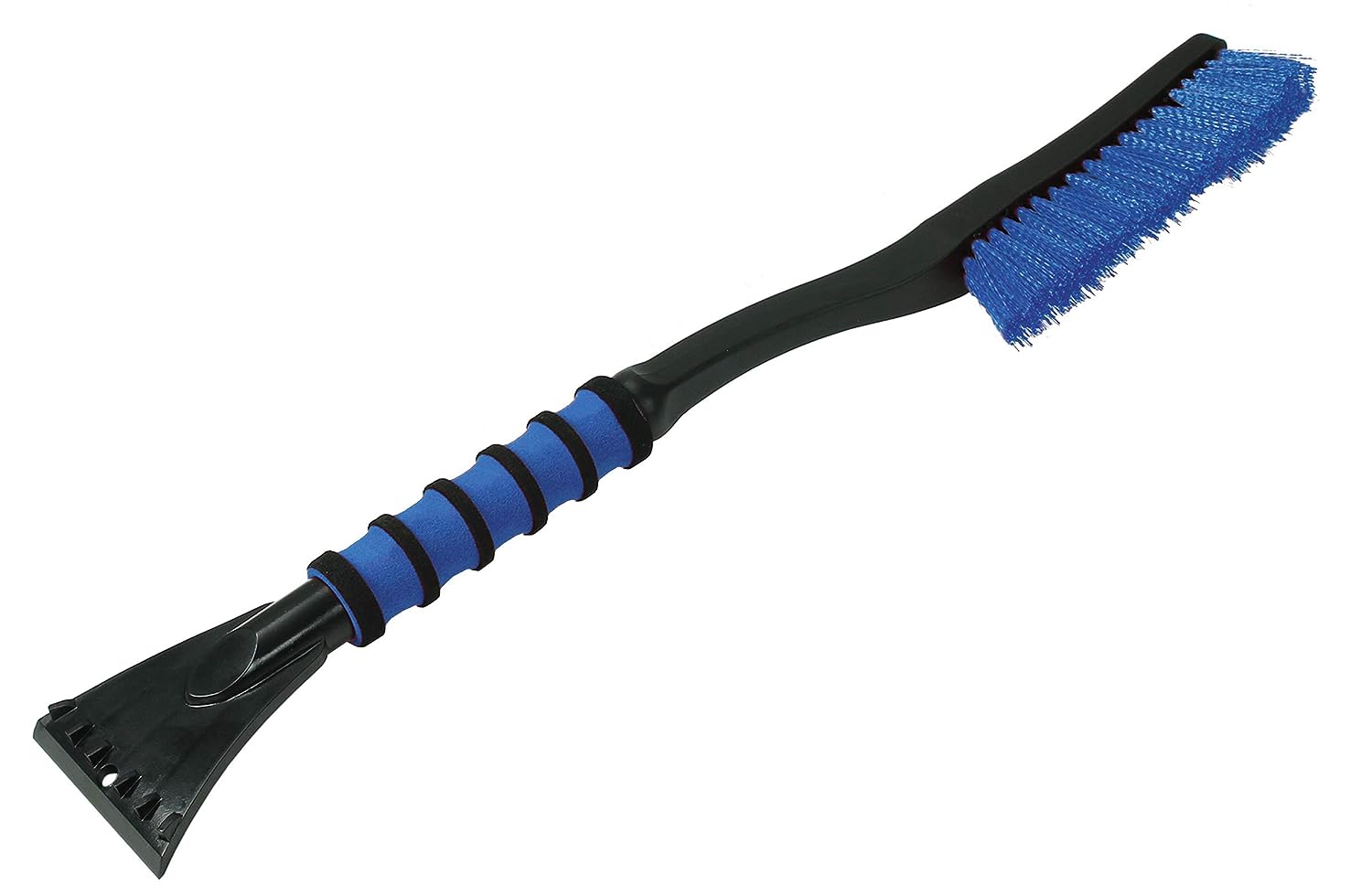 The Mallory Snow Brush is 26 inches long. It features four rows of sturdy plush bristles for removal of heavy snow. The 4″ wide scraper blade with tough ice chippers allows you to break through and clear thick ice. This ice scraper has a contoured soft foam grip that the majority of customers who left comments, felt was comfortable. At 26 inches in length, this is a long reach that should be able to reach most vehicles. This of course also depends on your height and arm reach along with the length of your vehicle’s windshield. But for the most part, this is a long reach. A few downsides to this brush are that some people received defective ones. Another negative is that people reported that the bristles fell off shortly after they received their brushes. If you do get one that is not defective, you may be satisfied. Just be aware that there were quite a few reports of people who received defective ones. Another negative is that the foam padding on the handle may be loose on some of the brushes being sent out. The price is good compared to other snow brushes.

Here are some top questions that I found for people considering buying the Mallory Cool Tool Snow Brush.

Related Article: Best Ice Scraper – Top 10 for You to Choose From