You are here: Home / Must Reads / The History of Christmas Holly: How Did It Come to Be?

One of the most popular symbols of Christmas is the Christmas Holly. With its bright red berries, Christmas Holly is a beautiful decoration that many people decorate their houses with. As popular as Christmas Holly is, not many people know the true meaning of it. If you have always wondered what the history of Holly is and why people decorate their homes with it, you have come to the right place. In this article, you will learn all about the history of this plant. I'll also go over some ways you can decorate your home with Holly.

The plant Holly has many symbolisms and meanings. Many people use to believe that the Holly plant was a magical plant. Later on, Holly was used at Christmas time because of its festive look. In addition to this, Holly has a Christianity symbol. Let's take a look at how Christmas Holly came to be.

Christmas Holly Began as a Sacred Plant by the Druids

Long before Christmas Holly was used for decorating homes, the Druids believed this plant was sacred. While other plants wilted in winter weather, Christmas Holly remained green and strong. The Druids thought that Holly was a magical plant. Holly is a symbol of life and the season spring.

Holly Was Used for Decorating Homes During the Winter

Early Europeans used holly as ornamentation during their winter solstice celebrations. The winter solstice, which occurs in late December in the northern hemisphere, was the longest night of the year and signified the gradual lengthening of days and coming spring. Therefore, the Europeans would have a celebration because of the fact that spring was coming soon. In Norse mythology, Holly was thought to prevent lightning strikes. Holly's symbolism of the new season made it an appropriate and colorful ornament for winter festivities.

Holly Also Has a Christian Symbolism

Although Holly was thought to have certain powers, its main symbolism is for when Jesus died on the cross. The prickly leaves represent the crown of thorns that Jesus wore when He was crucified. The berries are the drops of blood that were shed by Jesus because of the thorns. Because of this, in Scandinavia, Holly is known as the Christ Thorn.

Today, Holly Is Used When Decorating Homes for Christmas

These days, Holly is used for decorating homes for Christmas. Not many people know the meaning behind this beautiful plant. People use this plant for decorating front doors, making wreaths, and making tables festive. 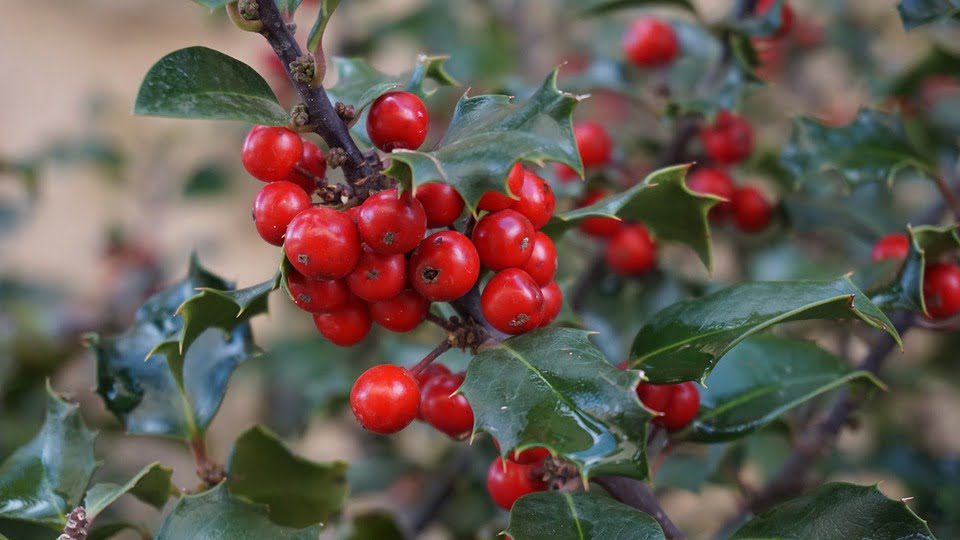 History of the Song "The Holly and the Ivy"

"The Holly and the Ivy" is a popular Christmas carol that was written in 1790. It celebrates the nativity scene. Before we look at the meaning of this song, let's take a look at the meaning of ivy. Ivy has to cling to something to support itself as it grows. This reminds us that we need to cling to God for support in our lives. As for the song "The Holly and the Ivy", you will notice that there are five stanzas. The second stanza talks about Holly's flower being as "white as a lily". This stands for Christ's purity.

In the third stanza, a correlation is drawn between the red color of holly's berry and Christ's blood. The "prickle" in the fourth stanza stands for the "crown of thorns" worn by Christ. The last stanza reads "The holly bears a bark as bitter as any gall". This could be a reference to the drink offered to Christ as He hung on the cross.

English Holly is the most popular kind of Holly. It is the kind with prickly leaves and bright red berries. Most people decorate their homes with English Holly.

American Holly is often used to substitute English Holly. It is similar to English Holly, except that its leaves are darker and glossier.

This type of Holly is often called Sand Holly because it grows well in sand. Bright red fruits are produced in the fall, though they tend to fall off easily. Because of this, not many people use Carolina Holly for decorating.

The Chinese Holly will produce red berries, but when it doesn't have berries this plant doesn't look like Holly. This type of Holly will grow well almost anywhere.

Hawaiian Holly is popular in Hawaii, hence the name. Unlike other types of Holly, this plant will produce darker-colored berries. The fruit is usually purple or black. 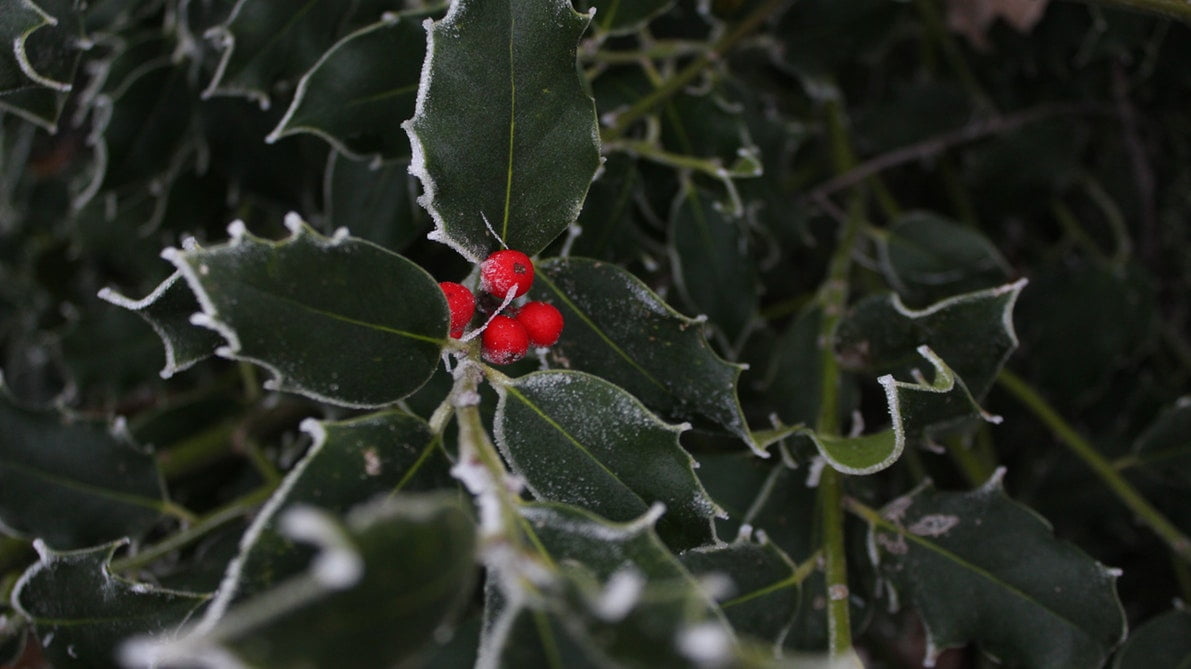 Ways to Decorate Your Home with Holly

There are so many ways you can decorate your home using Holly. Christmas Holly is often used for making wreaths, but there are many other decor ideas as well. You can use it for table decor, you can put it in pots, and you can wrap it around candles. Here are some creative ways of using Holly to decorate your home.

This next idea is very creative. All you do is fill a jar with water, put some Holly inside, and place some floating candles in it. The floating candles will float in the water without the flames going out. You can either cut the Holly into short pieces or you can place the Holly in the jar as one long piece. 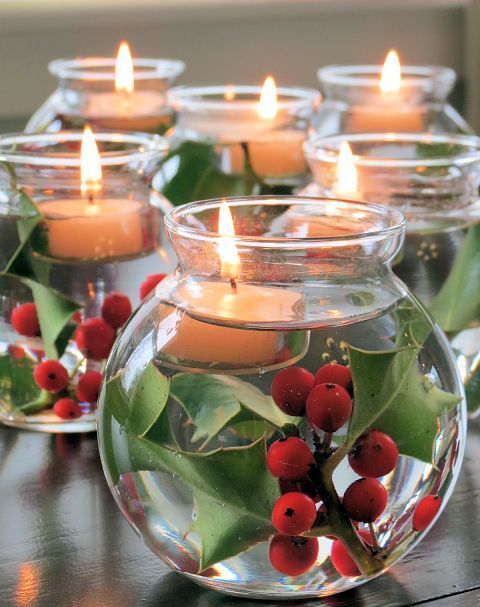 A Holly wreath is another great way to decorate your home with Holly. To make your own fresh Holly wreath, you'll need the following supplies:

Start your wreath by gathering a bunch of laurel branches. Add one Holly branch to the top and trim the bottom of the bunch. Wrap twine around the base of the bunch and then around the grapevine wreath. Secure the bunch by tying the twine in a knot, but do not cut the end off. Continue this process until the entire wreath is full of greenery. When you come to the end of the wreath, tuck the last bunch under the tops of the leaves of the first bunch. Tie it in a few knots to ensure that everything stays in place. Use your pruners to cut down any branches that are sticking out. 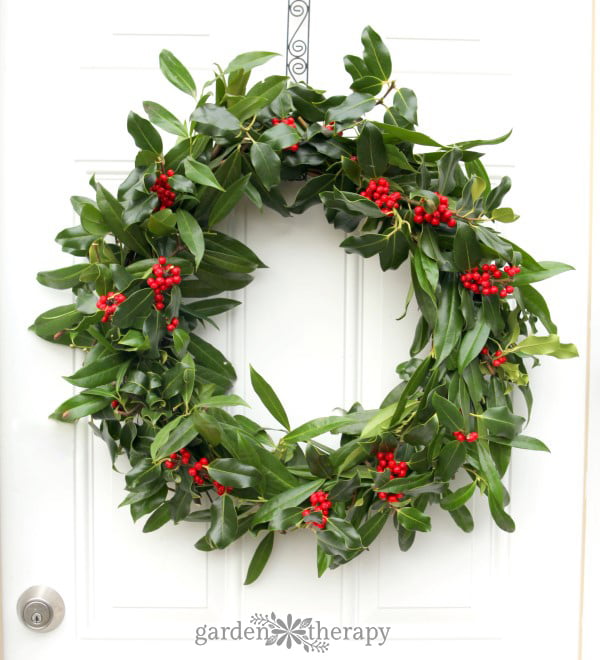 This next idea is perfect for decorating a mantle. Simple fill vases with branches of holly berries. You can decide if you want the Christmas Holly to have the leaves on it or not. 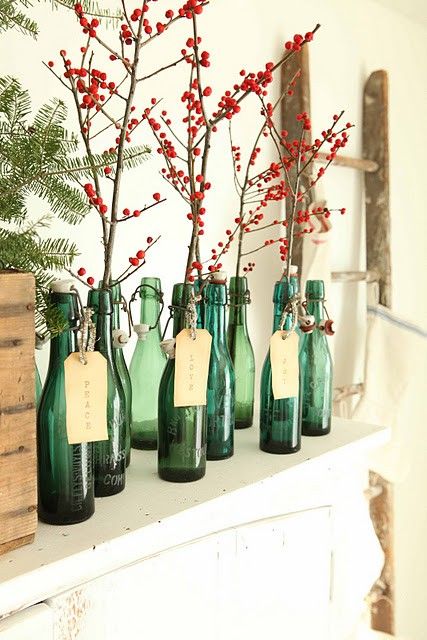 Holly makes great table decor. There are so many options for decorating your table with Christmas Holly. One idea is to wrap the Holly around candles. Another option is to make a wreath out of holly and place the candles inside the wreath. You could also fill vases or jars with Holly, just like the idea that I mentioned above. 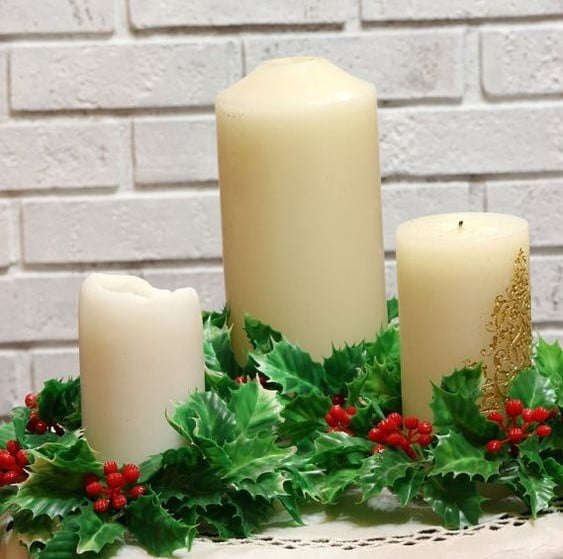 Remember That Holly Is Poisonous to Pets and Humans

Although wild birds snack on Holly berries all the time, these berries are poisonous to humans and other pets. Make sure you keep the Holly far away from your pets, as they can harm your pet. If you notice your pet smacking his lips, drooling, shaking his head, vomiting, having diarrhea, or not wanting to eat, he may have swallowed Holly. If you think your pet swallowed Holly, call your vet right away. You should also be careful of where you put Holly if you have young children. Children usually leave Holly alone since it is prickly, but you still want to be safe. If you think your child has swallowed Holly, you should call the poison control right away. Eating a small amount of Holly will not kill your child or pet, but eating a large amount of Holly can be fatal.

Holly is probably the most popular Christmas plant, besides mistletoe. As popular as it is, not many people know the history of Holly. While it is unknown when people began using Holly to decorate their homes, it is known that Holly must have been used for a long time. Holly symbolizes the crown of thorns that Christ wore on the cross. The red berries symbolize the blood that He shed. Some people use to believe that Holly was a magical plant, but nowadays, most people only use it to make their homes look festive.

Great ways to decorate your home with Holly include to make wreaths, put them in vases, and wrap them around candles. Remember that Holly is poisonous to pets and humans, so keep them away from young children and pets. If your pet or child eats Holly, call your vet or poison control right away. While a small amount of Holly will not do much harm, too much can be fatal. Always keep the Holly up high so that your children and pets cannot reach it. I hope that this article has answered all your questions about Christmas Holly. Now you know the true meaning behind this beautiful plant.